I found out a few days before that Katie Hopkins had been invited to the awards to collect a 'Cream Cake Award' for being unsupportive of the plus size industry. Seeing as the event was to celebrate plus size fashion, designers, writers and general advocates, I was just surprised she had been invited to such an event, even if for a negative award. 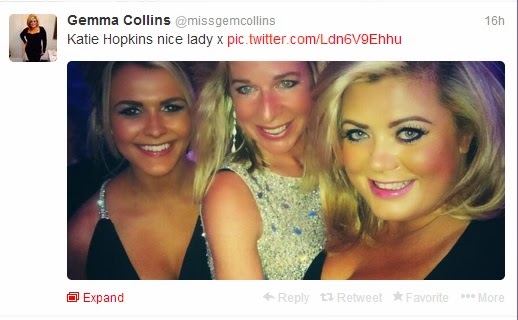 What flabbergasted me even more last night was when I saw Gemma Collins at the awards, next to Katie Hopkins proclaiming what a "nice lady" she was... This was about 10 minutes before Kate Hopkins tweeted that fat women should change for the better.... #Ironic #YesIUsedAHashTagInABlogPost

I wonder if Gemma Collins still thinks Katie is such a nice lady?

To be honest, I was upset and angry that she would tweet something while at the actual event. If she doesn't like fat people, that's up to her - but why attend an event for POSITIVITY and bring it down with such hurtful thoughts while still in the building?

I get that Katie Hopkins makes a career out of being a bitch - I hope that she is a character rather than actually being a bullying, racist, child hating woman  - but who knows!

What I don't get is why she was allowed to tweet such drivel while AT THE EVENT! These women have taken a massive step to get up in a room full of people and show off their bodies - how dare someone ridicule them? These plus size events are set up to celebrate our bodies, our confidence & as a safe haven to recognise achievements... Even if you don't agree with plus size, or awards, or pageants - why would you come into a room where this is happening, just to put down the women who are taking part? ITS BAFFLING!

When she sent tweets like this before the event - surely people realised it would only end in belittling and bullying?

Anyway, I sent quite a few angry, ranty tweets last night - as did a few others. A couple of mine were picked up by Katie Hopkins and Retweeted - which lead to a flurry of new twitter followers and of course some interesting replies - including 'insulting' me by calling me a fat lesbo & asking if I have normal size friends... blah, blah blah... because fat is obviously as insult!

So anyway... The whole point of this bumbling, ranty blog post is that I would love to hear your points of view! Are you angry that Katie Hopkins that attended or should she have been allowed to go? Were the twitter gang right to tweet about the event, or should it have been ignored? I could not have kept quiet about it, or ignored bullying but I would love other peoples thoughts and feelings on it!

If you were there - I';d love to know what it was like, did you talk to her? Were people in general talking about it on the night? Did anyone approach her?

Thanks so much - enjoy your Sunday!

https://unsplash.com/photos/-stO6c-Yxzg  Venice has approximately 100 museums, monuments, and galleries to enjoy if you are a historian. ...