When Did 'Supporting' My Body Become Fashionable? #PlusIsEqual - Or Is it?

It is no secret that I want to see more body positivity in the world. I am a big believer in having fashion and opportunities available to everyone no matter their size.

When you consider that this is something I am so passionate about, you would think I'd over the moon with campaigns by the likes of Lane Bryant such as #PlusIsEqual.

By their very own definition of the campaign "It's time to represent 67% of US women are size 14-34. But they’re underrepresented on billboards, magazines, TV… everywhere. We believe all women should be seen and celebrated equally."

At first glance it really does look fantastic. A campaign that goes right up to a US size 34 is amazing and well over due in my eyes. There is a count down on the website to their launch but in the mean time it has got people talking and sharing photos on social media, which can only be a good thing!

So, they released a tee to support the #PlusIsEqual movement and I headed over to the website to have a nosey... Imagine my surprise when I discovered that they only sell up to a size 28.

Now don't get me wrong I know that Lane Bryant usually sell up to a size 28 and that is fine (well it's not, but you know what I mean) but surely for a campaign which calls for women up to a size 34 to be celebrated equally,they should sell clothes that I can actually celebrate in? 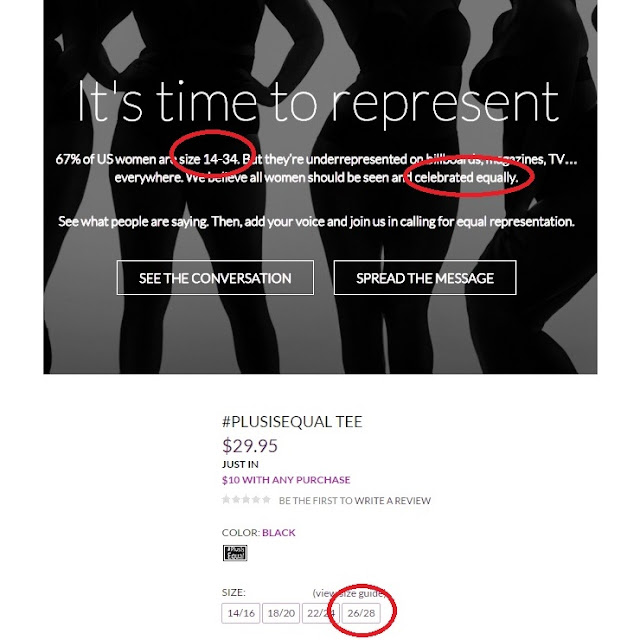 I have had a couple of conversations on social media but they just don't seem to get it... It feels like this and campaigns such as #StyleHasNoSize are simply being done because they're fashionable? We know that the media are talking more about body image positivity and being included - which is great! 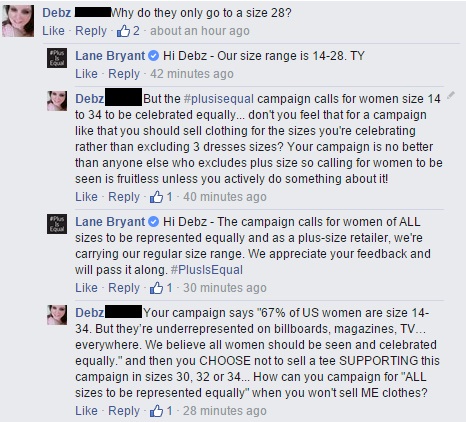 But it can't just be fashionable. Brands like Lane Bryant can't just be doing lip service. This isn't about creating hashtags and gaining popularity because people think you're doing something good. If you're going to campaign for women up to a size 34 to be included then for goodness sake, how can you possibly do something that they are excluded from?

This isn't about me wanting more fashion choices (although I do), this is about brands fulfilling what they promise rather than just saying what they think we want to hear and not backing it up with anything!

What do you think?