The Baffling World Of Online Dating...

As I have been sat in tonight (on a Friday of all days!)  I thought I would log into a dating site or two and see what was happening.

First I decided to give Plenty of Fish some attention... and that bought this gem out of the woodwork.

This conversation is copy and pasted direct from the site - It is, unbelievably a conversation that actually happened.

Me:  You do realise that the first time we spoke you were extremely abusive to me? Why
would I chat to you again?

Him: i dont remember that, but if i was then im sorry, of course being online and keep getting let down all the time, sometimes puts people in a foul mood, im sure i didnt mean to take it out on you. sometimes i get moody. i dont mean to. recently ive been looking for work again, so of course being let down all the time makes me down in the dumps lol.

Me:  Oh. I remember... and last time I reminded you of it (when you messaged me again - this is the 3rd time) you blamed your friend for using your account.
You told me I was too fat and that I would never get a boyfriend unless i lost some weight - whatever foul mood you were in, there is no need for that so I really have no motivation to have a conversation with you!

Him:  shame as i actually think your quite pretty as you are.xxx

Me: Perhaps you shouldnt have told me that I was too fat to ever get a boyfriend then.

Him: well, i dont think you are.i would love someone as nice as you on my arm.xx
that was cruel of me and im not normally like that, i assure you. truly not.xx

Me:  I couldn't care less to be honest with you. I don't have friends who are judgemental of others let alone potential dates.

Him: Well i would love to date you, really would.xx

Me: I would recommend that in future girls you find attractive and would like to date, you try not to put down their looks and damage their self esteem by telling them they will never be good enough for a guy - you'll have much better luck with getting them to agree to go out with you.

Him:  well, i hope you except that im sorry and let me get to know you ?xxxx

I am not sure what it is about dating websites that let men (and probably women, I haven’t dated them so I don’t know) say what they want without having to worry about it... The above gentleman only abused me the first time after he has asked me out and I didn’t reply quickly enough to his messages or with the answers that he wanted - there is nothing quite like a man scorned!

Between him and the offer to take hardcore drugs with a stranger on a Friday night I am left wondering if online dating could work for me.

I would love to hear your online dating experiences!

Am I The Only One Left Confused By Online Dating?

I know, two blogs in one day can be over the top, but when inspiration hits me - I just have to type!

Anyone who knows me will tell you I have a chequered past when it comes to dating. I am, what you would call an online date. I am on and have been on different dating websites in the vain attempt to meet my Mr Right, or at least someone who wants to take me out for dinner!

And then, I have afternoons like today where I have conversations like this and I am left wondering if online dating is the way forward.

Him - Love a bit of bounce
Me - k
Him - You like skinny boys?
Me - I like polite boys, which actually rules you out
Him - What have I said that isn't polite? Please don't rule me out
Me - 'Love a bit of bounce" Would you say that as the 1st thing you said to someone in a club
Him - Probably
Me - I'm not your type anyway, so let's just leave it as that.
Him - Why are you not my type? I really fancy you
Me - (I quote from his profile" "Would prefer someone who keeps in shape but not so much that they have big muscles. No whales, sorry. I like to weigh more than the girl I am seeing"
Him - That's just a joke. You are very much my type, I like them big
Me - You referred to girls as whales just to make a joke? That makes you not my type. Happy fishing.
Him - you look fun but you seem like you take yourself a bit seriously. Don't know why you're being grouchy. Give me a chance and let me take you out
Me - No.
Him - I haven't been rude to you, your acting like I've done something awful. I'm here to find a relationship
Me - You referred to girls bigger than you as a whale, I'm not interested in anyone who refers to fat women in this way.
Him - Can I send you some flowers to say sorry?
Me - No.
(More mindless conversation....)
Him -  I'm a nice person. You're hurting my feelings a bit
Me - Boo Hoo Hoo
Him - What size are those boobatrons?
Me - Whale sized.
Him - I don't care about peoples size. I just want someone to cuddle
Me - If you don't care about peoples size then you shouldn't mention on you profile that you don't want to date a specific type of person and use derogatory term to get your point across.

I'm still not sure what this 'man' wants... whether he's trying to be amusing or he's just not very clever? All I know is that this unorthodox approach to messaging girls on dating websites doesn't seem to be exclusive to him! 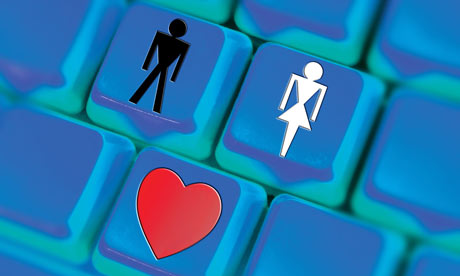 Him - I'm a big lad, not many can handle it
Me - I'm here to date not talk about the size of your penis
Him - Liar.
Me - Nope.
Him - You know you wanna date a toyboy hung like a horse
Me - Nope. I want to date a decent guy who is nice and fun to be with.

Sadly, these two men are not alone - and I know that many females reading this will be nodding with acknowledgement that they have had similar messages or conversations (Guys... Is it the same for you? Are us women just as odd?).

I don't know when it became acceptable to ask a woman's bust size, or how much she weighs when messaging her. I don't understand why people who message others on dating websites don't use the same rules for conversation making as they would in real life. You probably wouldn't ask a girl what size bra she wears before asking her how she is in a club, so why should a message on a dating website be any different?

I'd love to hear your dating experiences!

I understand that messaging someone on a dating site can be a tough chore - how do you know what to say? Have you said too much, or perhaps not enough?

I think, that people like this man (whom I have never spoken to before) need to adjust this blatant copy and paste message though!

Have you ever had any interesting messages on a dating website?

Can You Been Too Keen? 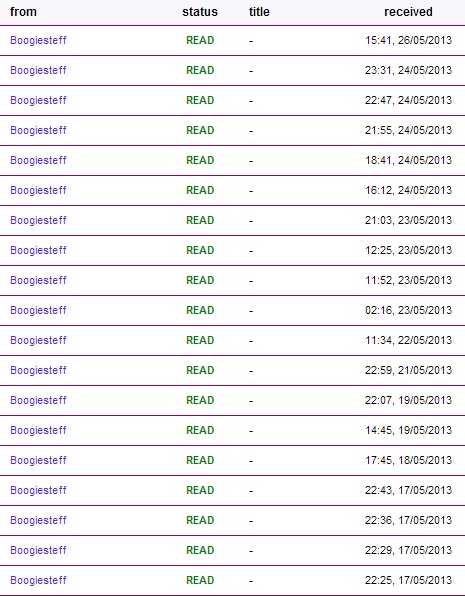 I know I keep my posting sporadic, but I do (as ever) intend to make every effort to write regullary once again.

If you are one of my friends, then you know my internet dating life has been somewhat colourful. I have had made cries from friends to write a book about dating, however as I can't seem to write more than 2 blogs a season that seems like an idea that will never happen!

There can be no denying that the World Wide Web is more accesible to us than ever - with smart phones and tablets we can now access the internet almost anytime, anywhere. However, realistically there is only so much you can do online, so what do you do when you've run out of stuff to do? Well in my experience, people turn to online dating!

Now, I would never say that online dating doesn't work - but for me, it has been some what of a rollercoaster ride... One that has even seen me spotted out and about on the town after being on a dating website (I know... it's my fault for living somewhere small and personal like London). 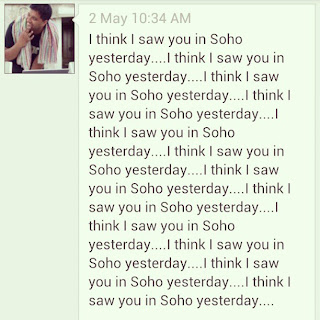 I know, he seems persistent! However, as persistance goes... This gentleman below really wins the prize! His messages (of when you can see are plenty) range from a simple smiley face, to him telling me know he knows I have read his message to him begging me to reply & go out with him. I have replied to just one message of his after he wouldn't stop messaging to tell him I was not interested... as you can see, he isn't one to give up easily! 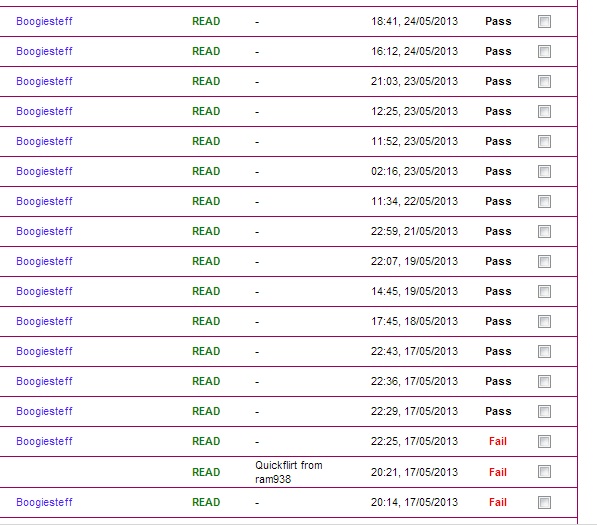 So far for me, internet dating has done nothing but give me a few hours entertainment with crazy messages and a few dead end dates with men who couldn't commit if their lives depending on it!

However the Bridget Jones of the internet work (Complete with big pants) I hold out hope of finding my Mr Right... in the mean time, I have messages like this to keep me smiling! 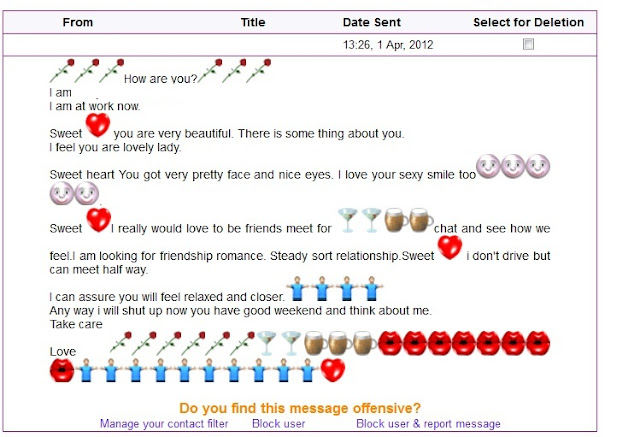 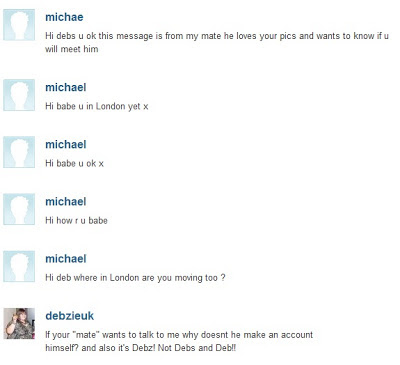