Plus Size Awards - What Happened?

Most of you will have seen on various social media websites that The British Plus Size Awards were cancelled at very short notice yesterday evening. As ever social media has been fantastic at supporting others and spreading the news of what is going on.... I wanted to try and put everything we know, have found out, need to know in one place. If you have ANYTHING you want to add to this page (including you Linda if you'd like to add a reason to this) then please let me know and I'll do my best to add it straight away. If there's anything I've got incorrect on here, please correct me.

I'll also update this with any updates as, when and if we get them.

The British Plus Size Awards is an annual event and this should have been the 4th year it has been running. Tickets were sold over the past few months for £99 each, for an event held at Porchester Hall in London. The event was due to start at 6pm on the 19th November.

At 5pm on the 18th November 3 posts were put online all with the same statement - on Facebook, Twitter and Instagram. Comments were quickly switched off, deleted or ignored. There was no attempt (as yet at 8pm on the 19th) to email attendees to say it's cancelled and in fact until very last yesterday evening some brands were still tweeting about attending. 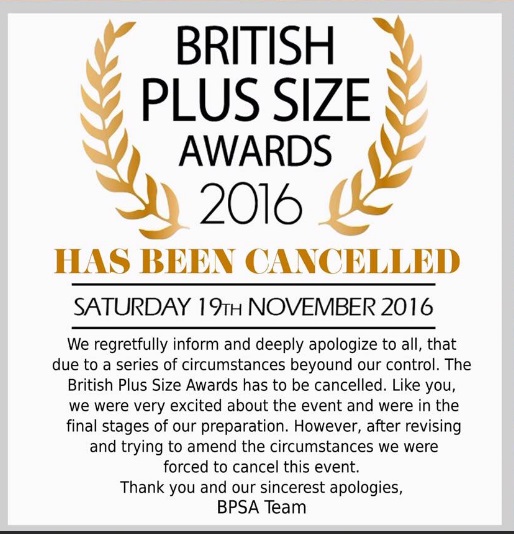 Their own website doesn't mention this and actually still says tickets are available! 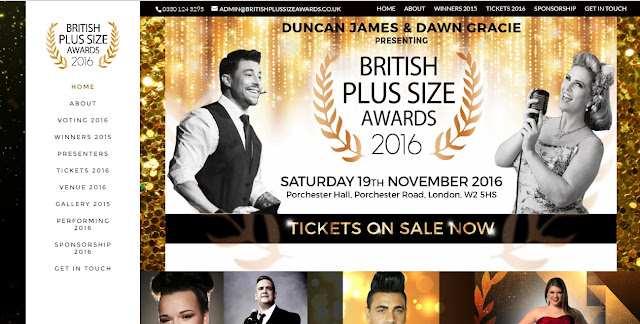 Throughout the evening of the 18th, social media of people and brands attached to The British Plus Size Awards were removed. Linda Wheatley/Kochs personal accounts disappeared on all social media platforms. Across social media accounts for Curvy Con, BGP Magazine and BGP Club night were removed at various stages to. 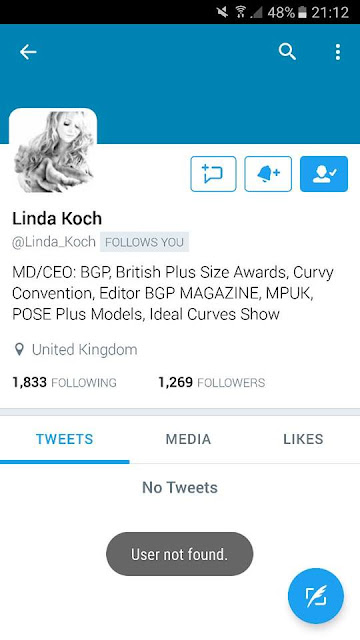 As far as I know, no one has heard personally from Linda at this stage, despite many people having personal contact details for Linda and many other people involved in the organising of such an event. The social media for this event has been radio silent since the announcement, with no attempts to contact anyone or reply to enquiries.

They also confirmed via Twitter message to people, it wasn't a problem with the venue. 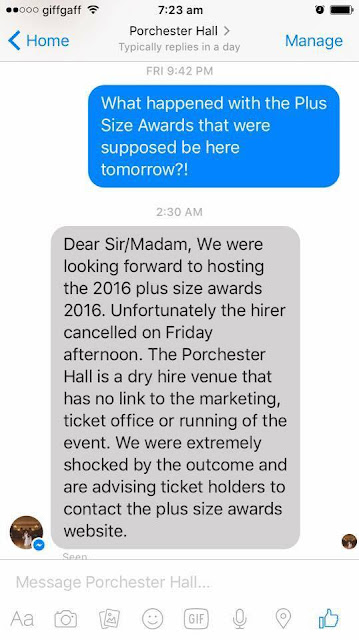 When People Were Told / Timeline of Events

Presenter Dawn Gracie and performer Blobbie Williams have both confirmed they were told via email around 5:20pm on the evening, just before the social media announcement. They haven't been given any explanation.

When I checked at 12:20pm on the 20th November the official website for The British Plus Size Awards had been taken down

20th November - The Plus Size Award Instagram account was deleted. As was The Ideal Curves Show website (another event Linda was involved in organising for March 2017)

21st November - The Grand Hotel in Brighton where The Ideal Curves Show was to be held confirm that a booking was pencilled in for March but that no deposit had been paid to book the venue. The British Plus Size Awards post on social media that a statement will be made at the end of this week.

22nd November Linda makes contact with Mary-Louise via email to confirm that she'll be having nothing to do with the Ideal Curve Show. 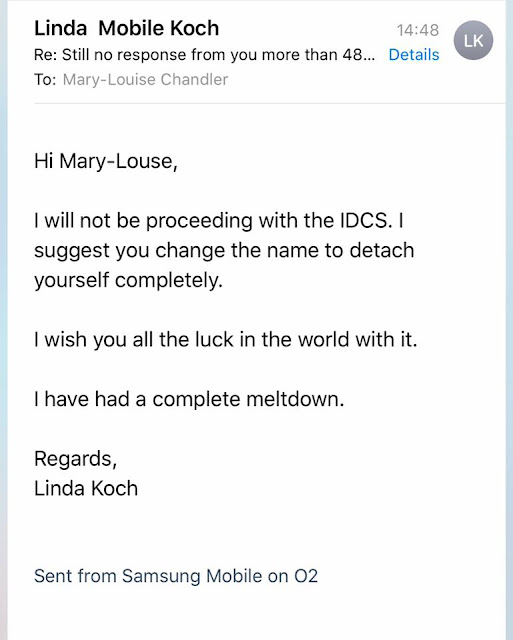 Mary-Louise officially cancels the event via social media for the Ideal Curves Show. 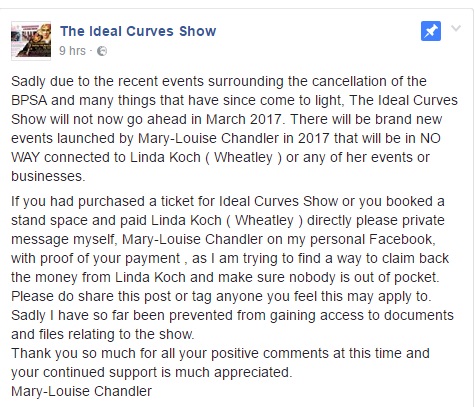 We also learn that on the 21st November Linda made contact with the Slug and Lettuce venue where her next event was due to be held (BGP on 10th December) and cancelled her booking. People had pre-booked tickets for this event as they have done every single year for the past 15+ years and it's cancelled with the venue! People are attempting to pick up the pieces, but the event hosted by Linda has been cancelled. Anyone who has sent her PayPal funds for tickets, I would suggest put in a PayPal dispute ASAP.


Other Things To Know

People have claimed they were owed payments for previous events held by Linda and were given tickets to this event in place of this, only for it to be cancelled. When it came to paying money to people that were owed, she opted for a lottery system to distribute payments. 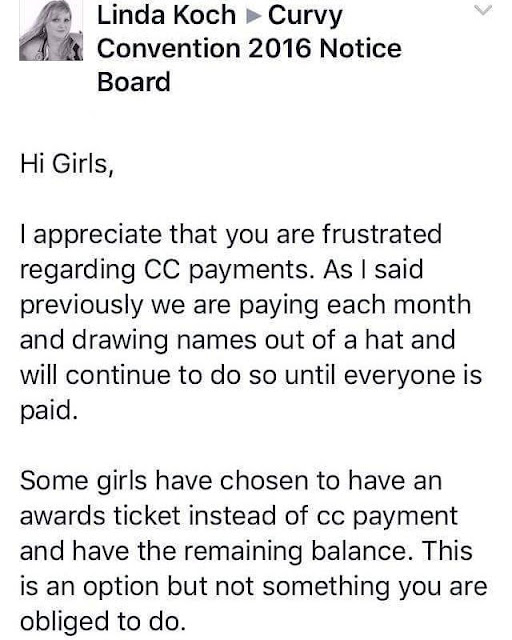 Club Indulge and Curvy Kate have teamed up to offer attendees an alternative London night out, which is free entry to anyone with a Plus Size Award ticket. Scarlett and Jo also stepped up to the plate and arranged a spectacular ball for over 100 of their members on the night, as a replacement of the awards their members were looking forward to attend.

No attempt has been made to announce winners or let anyone know what is happening.

There have only been 3 posts from the event to let people know it's cancelled - Twitter, Facebook and Instagram. All posted just once at 5:30pm - nothing else on social media, no emails sent to anyone who has paid for tickets and nothing on the events own website.

It appears that there are several companies with Linda's involvement which have been involved in this, some of which have various statuses against them on Companies House which appear to indicate they could be closing down. 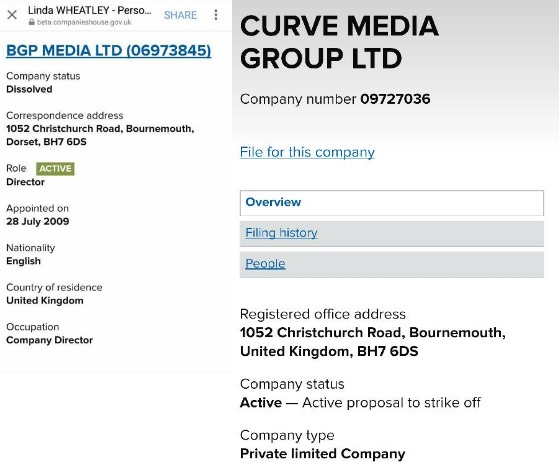 A few years ago Linda and her company (whichever one it was then) were due to host a weekender event at a hotel. A while before the event it was cancelled and no talk of any refunds. When people chased payments she told they that they had paid "BGP Limited" and that company wasn't trading anymore, there was a new company called "BGP". I believe some people got their money back after chasing for over 2 years, I am under the impression that some people were never refunded.

I personally have contacted Action Fraud to report this to them and would suggest others do the same. If they were asking for payment when they knew the event was going to be cancelled then something needs to be done about this. Either way lots of people have paid lots of money to travel to London with plans to attend and at the very least deserve their ticket money to be refunded.


I'll be contacting my bank to see if they can do anything to help. If you paid via paypal or credit card then contact them to make a claim.

If you have anything to add or correct please let me know. Everything on this page is purely my opinion and what I have seen come of the events as they have unfolded. Anyone is welcome to correct any errors. Please do your own research on this and don't take my word as gospel, once again this is my own opinion only.

One for the Girls*: Handy Tips For Maintaining Your Sexual Health

The term 'girls' and any reference to female/woman in this article refers to anyone who owns 'female' genitals and the sa... 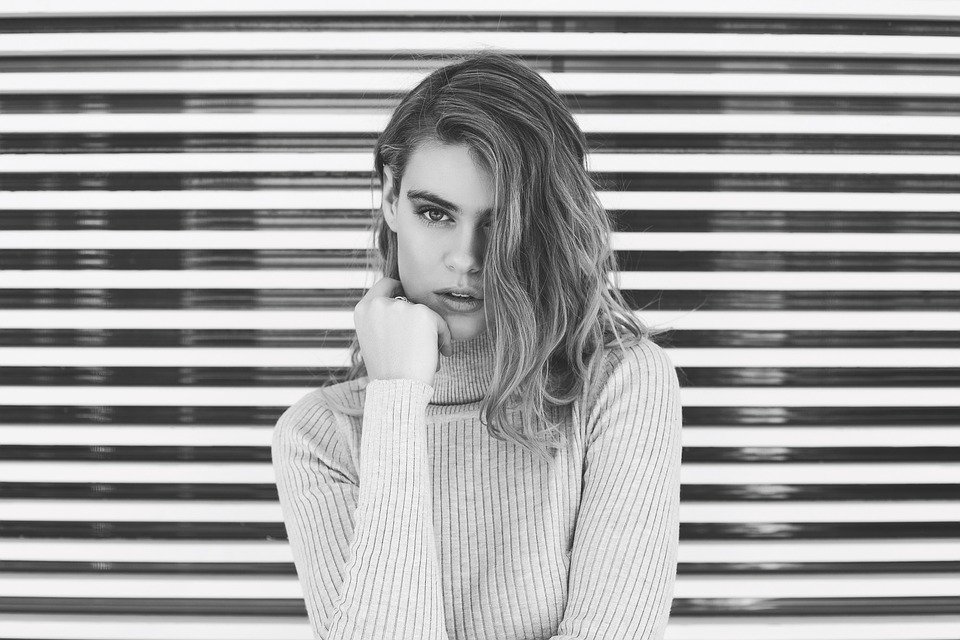